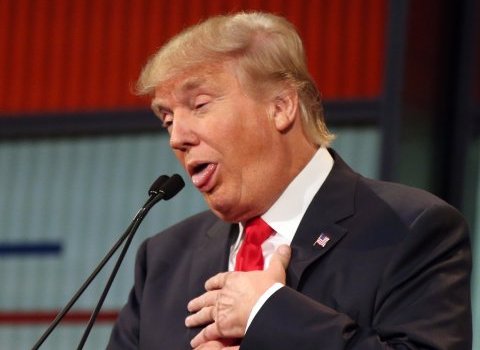 Someone asked me over dinner what I think our country’s fascination is with Donald Drumpf–er, Trump.

In full disclosure, this anonymous friend has enjoyed a very successful–and very long–career in law, and she was asking me to explain this one. Which is telling.

Donald Trump is a fascinating candidate insofar as he epitomizes everything the rest of the civilized world has said or thought about our country over the last 15 years, and, in some cases, longer.

Even after a thorough education that included college-level excellence in the subject of American history, I have an impossible time trying to recall a Presidential front-runner on either side of the political spectrum who has been more universally despised, yet less phased by his self-made infamy.

But for my money (which he will never have), it’s very simple:

We are surrounded by what we create.

Frightening though his buoyant candidacy is this deep into an election year, part of me is getting a kick out of watching him do this to the party he claims to represent:

When said party spends decades using its power to wage war on civil rights, women’s rights and gay rights, to say nothing of its equally relentless class warfare, and to generally monger fear and hate at every chance it gets, it gets not necessarily the candidate it wants, but the candidate it deserves.

In this democracy, or any other, you get what you vote for. When so many voters, after all those years, either don’t pay close enough attention to what they vote for, or don’t vote at all, eventually, you get Donald Trump.

Shame on us for our own blissful ignorance.

To further understand his popularity, one should look no further than the candidacy of counterpart Bernie Sanders. Trump and Sanders have personalities that are magnetic to a common sect: the angry white male (or female, as it were). Having spent six years in corporate radio, half that time coming at a right-wing news/talk station, I know one when I hear one.

They are angry with corporate avarice and Congressional indifference. They are angry because they have worked and studied harder for jobs and degrees that yield less. As a result, they are attracted to candidates like Trump and Sanders, who want not just to race for the White House, but to turn the establishment upside down when they get there.

Albert Einstein once said he “would rather be optimistic and a ‘fool’ than pessimistic and ‘right.'” It’s one thing to be overly idealistic, which may prove Sanders’ downfall if he does not surpass Hillary Clinton, but it’s quite another to be downright fantastical.

Shame on us for accepting any candidate who insists upon recreating our own puritanical past, instead of striving for a better future.

When did naked insincerity–and buffoonery–become presidential again? At least Nixon had the wherewithal to destroy the evidence.

Shame on us for not channeling the anger.

Those who are prepared to vote for Trump because of his business acumen had better prepare for the same rude awakening as discharged contestants on The Apprentice (most of whom wouldn’t have lasted five minutes at a real company).

His brand is not global. His success has not come without failure. He has swung and missed. He has–literally!–been deemed too risky for Las Vegas. He is a name-dropper. He is a pitchman. He is not even the real owner of the “Trump” products he has pitched recently. He is not a master businessman, and he is only able to masquerade as one because the very system he wants to game has been giving him more second chances than wives.

This is the part where my conservative grandmother, may she rest in peace, would say, “Don’t get sucked in by the hogwash.”

Shame on us for getting sucked in by the hogwash.

To be fair, corporate media, per normal for our country, is not exempt from our self-deprecation. Scott Pelley of CBS News, who, reporting for 60 Minutes, did one of the best interviews/takedowns of Trump to date, called him just what he is: a hurricane of words. If only Pelley’s boss, Les Moonves, shared his journalistic integrity, perhaps, by now, we could have weathered the storm.

With all due credit to CBS News, I miss the days of Cronkite and Brinkley, and Woodward and Bernstein, when the Les Moonveses of that era could be counted on to protect us from the Les Moonves you just read about there.

Fortunately for Moonves, his competitors don’t get a free pass. NBC might as well have given Trump a 90-minute commercial by allowing him to host Saturday Night Live in November, compared to one-sketch cameos in separate episodes for Clinton and Sanders. Its family of networks didn’t hesitate to join cable competitors in partisan nonsense, either. 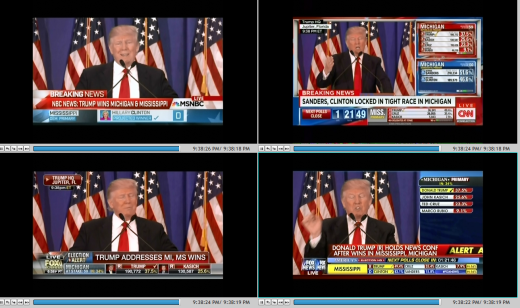 But they wouldn’t give it to us in spades if there weren’t a market for it.

Shame on us for creating that market.

We helped create the market for Trump in the same way we ushered in the era of “shock jocks” like Howard Stern in corporate radio. It wasn’t enough for us to just tune out and/or tune in to someone else. We masochistically indulged Trump because we wanted to hear what he’d have the temerity to say next.

Shame on us for making catnip out of cat excrement.

In the absence of strong leadership, it is all too easy to be duped by foolhardiness. While “leadership” is a word that can mean many things to many Americans, it is never to be confused with merely using a big platform to repeat empty euphemisms and schoolyard taunts louder than the person next to you until your followers believe them.

There are those who flaunt political correctness, to borrow a term used derisively by The Donald, and then there are bullies. America needs a leader who sees the difference.

Trump said in one of the Republican debates that the rest of the world is laughing at us. It was the first time in his entire campaign I found him to be dead right.

This year, it is up to all of us eligible voters, regardless of political orientation, to ensure the bully does not enjoy the last laugh.

(Featured images courtesy of the Associated Press and Media Matters for America.)