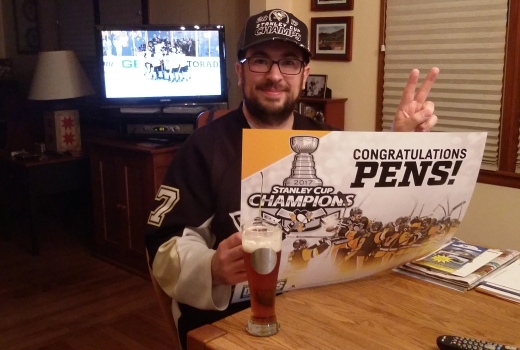 I need one of those fog “warnings” that Big Bob, of the Kiss Morning Freak Show Mikey and Big Bob duo, satirically blasts in the wee hours when visibility for Pittsburgh commuters is reportedly lower than normal. Emotionally, that’s what I’m in right now–a fog.

For me, it’s been a year that could be charitably described as interesting, between the things I was prepared for, like getting engaged, and the things I wasn’t, like changing jobs again. Even as I count my blessings, I am the first to admit I’ve entered another period of professional, and, to a lesser extent, personal, uncertainty, and the first to admit uncertainty is not always something I take well. And the year isn’t even over yet.

For my Pittsburgh Penguins, to whom I have staple-gunned my heart in good times and bad, it’s been a year that could be described many more ways. Challenging. Exhilarating. Stomach-knotting. Heart-pounding. Agonizing, mesmerizing and, ultimately, amazing. Mercifully, their year ended Sunday night.

So many random thoughts have flooded my head since the Penguins made history, suspending my own disbelief all the way to that fourth and final handshake line. Like how I nailed perhaps the most important Pens Predictor question of my life.

Like how maybe, just maybe, Crosby’s second consecutive Conn Smythe was the media’s way of picking him up after all those times he was knocked down and more or less forced by a comically-policed league to turn the other cheek.

Like how Nashville was robbed of a goal by one of those Keystone Cops in Game 6, not unlike how we were in the previous Game 6, in Ottawa–that’s my story and I’m stickin’ to it–and how life on the west side (best side!) of the Keystone State has a funny way of evening out.

Like how my underwear that night, through no design of my own, matched the pattern on Mario’s suit. I’m far from Illuminati, but I couldn’t make that up if I tried.

Like how all we were left with was Sid and a bunch of kids once our most valuable defenseman went down, as did other critical players in the middle of the playoff gauntlet. And all they did was beat the two toughest opponents in the Eastern field, followed by its hottest goaltender, then that of the Western half of the bracket, all while our own netminder, barely old enough to legally drink, posted back-to-back shutouts for his second title in a single calendar year, killing off a game-turning two-man advantage to help make that dream a reality.

Hence the fog. What this incredible group of players and humans has accomplished hasn’t fully hit me yet. Slowly, however, it’s beginning to, as is the thrill (read: restlessness) of victory.

I wonder how much more sleep Mike Sullivan lost than I? He spoke before the series-clincher about the grind of his job, yet he is the calmest, most poised Penguin coach I have ever seen and, of all the ones not named Bob Johnson, the one I admire and appreciate most. To me, he has no reason not to rest easily, especially now.

His place in my heart and in Pittsburgh sports history couldn’t be more secure. When his team passed the Cup to him, that’s when my smile turned big. With Crosby and Malkin I always feel we have a chance. With Sullivan I always know we have a chance. That wasn’t always the case before he got “the call” from Jim Rutherford, who’s carved out a pretty nice L-word (legacy) himself for an alleged stopgap GM.

Sullivan was the glue holding this remarkable run together. You are who your coach is. Pitt Football is Pat Narduzzi. The Pirates, at their generational peak, were Clint Hurdle. The Steelers, for better or worse, are Mike Tomlin. The Penguins are Mike Sullivan–young, skilled, smart, diligent and, above all, resilient–so resilient that, under Sullivan, they found a way to take down a Stanley Cup Final opponent that was, in these ways, their equal, and at times, their superior. In getting back on top of the hockey world, they were the perfect balance of alpha-male and self-discipline, and that starts at the top.

The Penguins won because no other team handled discomfort like they did. They reminded me that good things happen when least expected, as when the Blue Jackets were battering us (Guentzel’s greatness), the Capitals were crippling us (Fleury’s brilliance), the Senators were stifling us (Kunitz’s timeliness) and the Predators were playing with roadhouse money (Hornqvist’s heart-breaker) while I braced for the other boot to drop.

Recently I said it was rare that I was so proud to wear black and gold. I’ll say it again when I see our boys tomorrow.

I will be smart. I will be diligent. I will be resilient. As the Pens, against all odds, are champs once again, I will be a champion of change.

I will just play.

My name is Matt Popchock, and I am a Penguin.