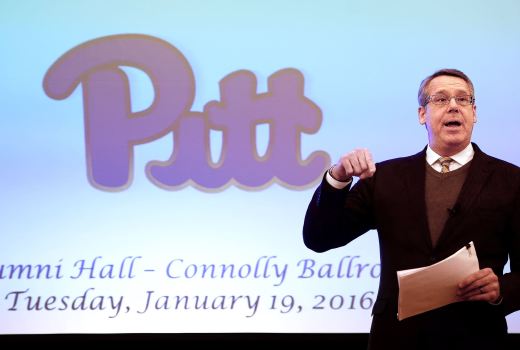 The hardest part of the transition from the Big East to the ACC for Pitt fans has been the adjustment to the new normal. Pitt football is becoming a bigger fish in what was already a bigger pond. Pitt basketball, on the other hand, is becoming a littler fish in a big pond, trying in vain just to tread water. Just not long ago, it was almost sunk–at home–by a team that had lost ten in a row.

Scott Barnes has done right by Pitt football in the relatively short time that has passed since he first set foot in Oakland, and his continued (increased) investment, financially and emotionally, is of utmost importance. As much fun as it has been over the years to watch Jamie Dixon’s Panthers at their peak, football will always be what puts food on the table. Any other athletic director at any other top-tier NCAA school will attest.

But a good basketball program is equally important to brand growth, and you don’t need to be a Coach K, let alone a Coach Dixon, to surmise that. Duke and North Carolina, using intra-conference examples, have certainly improved their stead on the gridiron, but when we hear those names, we immediately think one thing: hoops. The show those teams put on, especially when they meet on the same floor, like they did this week, is usually as good as any the ACC has to offer.

I may not have had the opportunity to attend Barnes’ recent “Town Hall” event, but there’s one burning question for Barnes I still need to have answered.

How can Pitt basketball do better?

Furthermore, can it do better as long as Jamie Dixon is still here?

Barnes has satisfied me with just about everything that’s come out of his mouth. His next big PR test is to come forward with an honest macro evaluation of Dixon’s program, and practical ideas of how to make it better.

One good one already hinted at has been making Pitt’s non-conference basketball schedule more competitive. Barnes wants the Backyard Brawl back in more than just football, and putting WVU back on the basketball slate would be a good first step. If nothing else, Pitt can draw inspiration from the ‘Eers, who needed a couple years to find their footing in a new league of their own before becoming a national power again.

Another thing of less, yet somehow, equal, significance has been Pitt’s gradual phasing-back-in of “The Script.” Although men’s basketball (to say nothing of women’s basketball) is one Pitt program that has a generally positive association with the block “PITT” lettering, The Script is one of the hottest new–well, old–logos in college sports.

Barnes didn’t get to where he is by being stuck in the past, or by being oblivious to it. He was one of the faces in the record crowd at The Pete when Pitt got humiliated by perennial ACC contender Virginia. He knows why Dixon is under siege. It used to be that The Pete was a house of horrors for anyone but the home team, and that Pitt could always go toe to toe with the Hoos, the Heels and the best of the rest. Both those things have changed on Dixon’s watch, so he has to shoulder some blame.

He also knows Dixon is a prisoner of his own success. Jamie built and maintained credibility Pitt basketball would not have had otherwise, and he put competitive, watchable teams on the floor year after year despite not necessarily attracting the nation’s top scholastic talent. He set the bar so high it’s that much easier to get down on him for his comparatively mediocre postseason record, let alone the mediocre results of his first few ACC campaigns.

Barnes rightfully acknowledged that success not long after he took the job, but he did it passively. He did it long before this Pitt squad showed signs of coming around in December, only to start going Jekyll-and-Hyde in January all over again. How does he feel now that anything gaudier than a bottom-of-the-bracket NCAA Tournament berth for Pitt seems outlandish?

Dixon may never have a fair fight again as long as he coaches here. In the Big East, he had to compete with a few Hall-of-Fame coaches. On the recruiting trail, he had a plan, which included building a pipeline to talent-rich New York that brought the program some of its best players, he stuck to it and it worked. Pitt was a tough team that worked its way to the top by outworking its Big East brethren. In the ACC, half the conference consists of Hall-of-Fame coaches, and the other half are, at minimum, competent recruiters with their own established recruiting bases. In the ACC, everyone works hard.

Pitt can’t just outwork teams anymore. It has to outwork and, for lack of a better word, out-talent its competition. History, both on the court and on the recruiting trail, proves Pitt will rarely be in a position to do the latter, which partially explains its early tournament exits. Aforementioned ACC powers–established ACC powers, mind you–like Duke and UNC will always have the first and best shot at the best players, especially in established ACC territories.

Nevertheless, the Virginia game, for one, proved that Pitt’s old ways can still work in its new surroundings. It doesn’t have to be a skilled team with grit. It can be a gritty team with enough skill to win. Unfortunately, not only has Dixon clearly not found the right players to pull that off in the ACC, but the ones he has found haven’t responded well enough to his coaching. A team takes on the personality of its coach, and these Panthers seem to handle discomfort about as well as Dixon does, which isn’t saying much.

But the program’s biggest dilemma was created long before Barnes was hired. Even if his trigger finger were itchy, he couldn’t change bench bosses in the foreseeable future, thanks to the lovely parting gift Steve Pederson left us:

He has to work with Dixon for now. He doesn’t have to like it. Does he? If he can’t change what might be the root of the program’s problems, how can the program be salvaged in the meantime?

Barnes can spin straw into gold on the gridiron. As AD at Utah State he drummed up interest in a previously middling mid-major football program that began winning consistently during his administration, and even boasted a long-shot Heisman candidate in Chuckie Keeton.

That happened because he surrounded himself with the right people and, like any AD, got what he paid for. He’s already surrounded himself at Pitt with Pat Narduzzi and a coaching staff that has re-energized the football team, ramped up its recruiting success and revolutionized its marketing. He’s already announced plans to put more money into the product than his predecessor, which shouldn’t be too hard, considering the direct correlation between Pederson’s dismissal and the uptick in donations to Pitt Athletics.

Does this mean Barnes will put big bucks into expanding Dixon’s recruiting base? Does this mean Dixon, whose recruiting success hasn’t been the same since Barry Rohrssen bolted, will have new assistants soon?

I don’t doubt for a minute Barnes knows football. However, his livelihood, as well as his previous athletic experience, is basketball. It’s time for him to put that passion to good use.

It’s time to hear a plan for Pitt basketball that involves more than Scripts, uniforms or Zoo taunts.